Laughter: Use As Directed 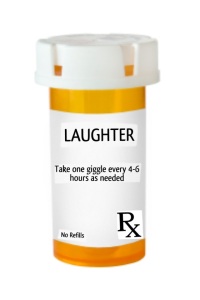 Who doesn’t love to laugh? Yeah, I don’t know either. Everyone can use a good laugh from time to time, now and again. When the stresses of life weigh you down, it’s good to be able to laugh it off. Whether it be problems at your job, issues at home, friction amongst members of your babysitters club, or whatever. The healing power of a good laugh is universally recognized. So much so, in fact, that the old adage states:
Laughter is the best medicine
But here’s the thing. I’ve always thought of laughter as more of a vitamin than a medicine. It’s the kind of thing that the body can use everyday, as opposed to just when you get the sniffles.
No self-respecting doctor would say to a sick patient, “Mister Smith, I have some good news and some bad news. The bad news is that we’ve gotten your test results back, and I’m sorry to say that you have advanced tuberculosis. The good news is that the complete series of That’s So Raven is now available for instant streaming on Netflix. So you can just go home and watch it and soon you will be cured.”
It doesn’t work like that. Although it would be wonderful if it did. Except for the fact that laughter would be regulated as a controlled substance and you would be required to have a prescription from a doctor just to laugh. Having to pay a co-pay to chuckle and chortle would suck. The uninsured would be turning tricks in the street for a giggle, and doing unspeakable acts just for one simple guffaw.  People without a prescription would be relegated to laughing in dark alleys and flophouses, always waiting for the jack booted humour police to bust down the door and stop all the fun.

Once you get a taste of laughter, it’s very hard to just quit cold turkey because it’s so addictive. One might even go so far as to call laughter infectious, and they would be right. Detoxing off of laughter is one of the most physically demanding withdrawal processes known to man, or ladies. You may very well find yourself waking up in the middle of the night breaking out in a cold sweat with a severe case of the cackles. Even mundane, everyday tasks such as opening the door to a knock-knock joke can be enough to send you back into a downward spiral to Sillyville. You spend your life always looking for your next fix. “What’s on Comedy Central? I’ll just take a quick peek. No it’s okay, I can handle it! I’ll just watch ’til the first commercial break, I’ll be fine.”
All lies you tell yourself just to cope with the pain. Meeting with your dealerman, or lady, just to purchase some old bootleg cassette tapes of Bill Cosby or Yakov Smirnoff,  just hoping to taste that sweet familiar rush one more time. It’s a vicious cycle.

In closing, all I’m saying is that while laughter is important to maintaining a healthy mind and body, we should probably stop referring to it as the best medicine. Because it’s not.

Laughter is the best vitamin.

Marijuana is the best medicine.

Leave a Reply to I’m Not Laughing AT you, I’m Laughing WITH You! | Recipe For Marriage Cancel reply