Bill Mitzvah – When A Boy Becomes A Man

I think I was sober here, although my haircut apparently disagrees.

I turned forty-three a few weeks ago. Very quietly. I’m not a big drinker. Alcohol isn’t really my gig anymore, although it used to be. Occasionally I will partake in liquid libations, and I will enjoy it. But not nearly as much as I once did.

I got drunk for the first time on my twelfth birthday.

Now, I’m not counting the other times I would sneak a sip off my mothers’ highball, or whatever type of beer my father was drinking at the time, usually Schlitz or Schaeffer. Sometimes I wouldn’t even have to sneak a sip off the highball, because my mother would offer me a sip. Calm down, it was a different time back then. Watch an episode of Mad Men if you don’t believe me.

Now, I’m not saying that my mother would let me get plastered during a party and then force me to get up on the coffee table and do my incredibly spot on impression of Elvis Presley, to the sheer delight of all of her friends. That would be a ridiculously poor judgment call for a parent to make in the course of raising a beautiful blue-eyed boy baby. Letting them get shit faced and spread the joy of music to the world, one living room at a time? I think we can all agree that would be wrong.

But encouraging your cherubic young son to take a shot of liquid courage before he absolutely brings the fucking house down with his heartfelt, soulful rendition of “In The Ghetto”? Ain’t nothing wrong with that, am I right?

Thank you. Thank you very much.

Mom died from cancer when she was forty-four. I was eleven. I watched my father cope with her death by drinking heavily, every night. Usually he would pick up a handle of whatever rot-gut whiskey was on sale at Brady’s Package Store on his way home from work, and then drink until he “fell asleep” in his chair. When he was passed out,  I could finally shut off the sad country music that was playing on the record player. Most of the time it was Marty Robbins’ “My Woman, My Woman, My Wife”. He listened to that fucking song repeatedly. To this day, I get a pit in my stomach if I hear it. Luckily that doesn’t happen very often. Apologies to the estate of Marty Robbins, but I was more of an El Paso fan.

One day during that long painful year, I was over at a friend’s house after school. His parents had a fully stocked bar down in their basement. I mean FULLY stocked. They had cases upon cases of alcohol. I told him that my birthday was coming soon and I needed a bottle of booze to celebrate with. Because that’s how all twelve-year olds celebrate a birthday, right?

Mom always said, “Cake and ice cream is for pussies”. 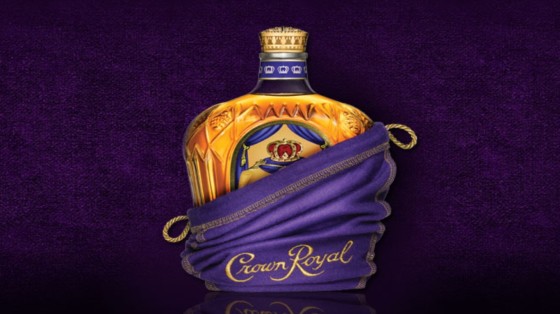 He agreed to sell me a bottle. I was particularly enamored with the Crown Royal, because it came in a purple velvet sack. I felt like I was making a shrewd business decision by picking a bottle with extra bells and whistles. Oh, the wonderful things a growing boy could do with a velvet sack and some alone time. We haggled for a while over the appropriate compensation due for a bottle of top shelf booze with an accompanying love sock.

He was looking for cash considerations that I was unable to accommodate, as I was an unemployed eleven year old boy. After some fierce negotiating, I talked him down to a half-pound bag of peanut M&M’s and two of the candy bars that I had been assigned to sell for a school fundraiser. I’m pretty sure I got a good deal. Although the school got totally fucked.

When I arrived home, I hid the bottle under some clothes in my bedroom closet. I would check on it fifteen times a day, just to make sure it was still there. I was scared that my father would find it and yell at me. Or even worse, that the monsters living in there would find it one night and have a party. A party that ended with them stumbling out of my closet, loudly demanding that I wake up and cook them some french toast at three in the morning. Because french toast is delicious 24/7, and even drunken monsters know that.

The bottle survived in there undiscovered for the two or three weeks leading up to my birthday. On that day, I paired it up with a well aged three liter bottle of RC Cola and set about the task of becoming a man. There was a new development being built down the street from my house. My sister Donna, my friend Jeff, and I climbed up onto some rocks overlooking the street and drank the whole bottle whilst chain-smoking Marlboro reds. You know, like sophisticated kids.

It would be the first of many times this would happen during my teenage years. You know, once I actually became a teenager. Because twelve years old isn’t quite there yet. But I was working on it. After polishing off the booze, we took a walk, or stumble, down to the East Weymouth Bowl A Wey, and played some Defender. I really don’t know how we made it down there, or back home.

But once again, it’s something I got very used to over the years.