I recently got Freshly Pressed. Felix Baumgartner recently free fell from the edge of space. I get it. We’re both men that have reached great heights and achieved things that we were once told we’re impossible by the experts. By “the experts”, I’m talking about NASA scientists and some older boys in my neighborhood. The NASA guys were mostly talking to Felix, the older boys were mostly talking to me. Although I’m sure there were some NASA boys that were older than Felix, we’ll just concentrate on the older boys in my neighborhood. Just to clear up any confusion.

Felix was probably told at a young age, “Hey buddy. Quit daydreaming about flying all over the place like a crazy person type of guy, and go make me a (whatever young children in Austria make). I’m not very familiar with the manufacturing jobs over there. Chocolates? Lederhosen? American flags? No, American flags are all made in China. Well whatever it is, people thought Felix should focus his skill sets on that, and not on being a ridiculous star-gazing dumb-dumb.
I on the other hand was always told as a child, “Hey Bill, there’s no way you can write down these stupid things you think and have people read them on the Internet. First off, whats an internet? You’re just making up stuff to confuse us. It’s common knowledge that older boys don’t like being given the runaround, so we shall commence with the wet willies immediately.”
I’m saying it was hard for the both of us, Felix and I. But we both stuck to our proverbial guns and pushed forward with our dreams of grandeur.

The similarities go on and on, but they all lead to the same predicament. Where do we go from here?

Does Felix free fall from the international space station?

A nap sure would be sweet, though. 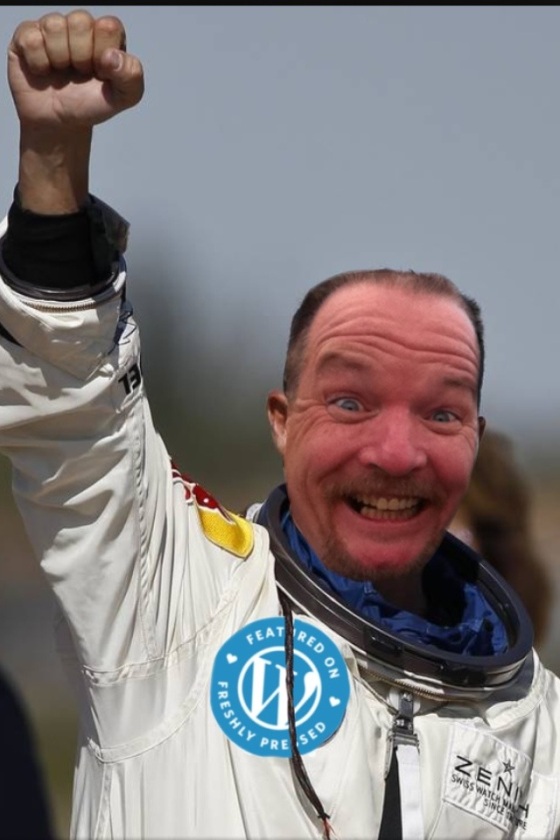