How To Survive A Bear Attack, Maybe 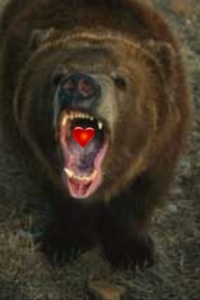 Once upon a time, if you needed to know something, you put on pants and went to the library. You could also wear shorts, or slacks, or a dress or something else. As long as you covered your genitals you were pretty much all set. Unless you were wearing a bathing suit. Bathing suits were frowned upon, and had no place in the world of borrowed literature, and still don’t to this day.

Needing to know things is one of the reasons people read. One of the main reasons, quite frankly. Having to go all the way to the library was one of the ways the man kept people down. How was someone supposed to work 20 hour days in the coal mine and still find time to go research what to do in case of emergency? They couldn’t do it. Henceforth the general population would remain clueless to important, lifesaving information.

With the advent of the Internet, people can just go on-line and do all the learning their frontal lobes can handle. Although you can’t always trust what you read on the Internet, you can almost always trust it, and that’s good enough for me.
With that in mind, I would like to present you with some helpful nuggets of knowledge that you might need to know before you die, so you don’t die.

What To Do In Case Of A Bear Attack:
Wow, you really got yourself in a pickle with that bear, eh? What’s an intelligent person like you doing putting themself in a position to get attacked by a bear? That’s uncharacteristically careless of you. Listen, if you don’t want to get mauled by a bear, you shouldn’t go to a place where bears are. The woods, the zoo, the circus, the honey factory, or any place that people carrying picnic baskets congregate. It’s very simple. Now I understand this is about what to do AFTER the attack has already started, but still, some common sense is always useful. You got a brain, use it.
A lot of people say you should play dead when attacked by a bear. Those people are stupid and you should immediately work to disassociate yourself from them and their dumb opinions. The only thing playing dead does is give the bear some time to “play” with his food and maybe invite some friends to dinner. You need to be loud and aggressive with this dude. Assuming a karate stance can be beneficial, because even in the animal kingdom, the ancient art of karate is feared and respected.

After the bear laughs at your karate stance and lunges for your face, you should duck. Now try tickling him. I don’t know if bears are ticklish, but it seems like a good place to start. Did it work? You’ll know that it did if the bear laughs. Is he laughing? No? Ok, let’s get a little more proactive. Quick, poke him in the eyes!

Did you do it? What happened? Is he dead? Yeah, I didn’t think so. Poking him in the eye won’t kill him, you probably just made him madder. Which is very scary, because he already looked really mad. Alright, see if you can stick your arm down his throat and rip his heart out . There’s practically no chance that it’s gonna work, but your options seem pretty limited right now.

Okay, did you rip his heart out? Where’d your arm go? I hate to be the bearer of bad news, but you’re bleeding profusely. It’s really working the bear up into a frenzy. It’s most likely the scent of all that blood you’re currently gushing. It’s like a fire hydrant. Fortunately it looks like you might have a second to slip away whilst he’s gnawing on your left arm. Or what was once your left arm. Is it still considered your left arm even though it’s not there anymore? Hmmm, good question, me. Thanks, you. I’m going to say it’s still your left arm even though it’s detached. So take this opportunity to sneak away while he’s still chewing on it.

Uh-oh, he’s done. We probably should have spent more of that precious time figuring out a way to save your life and less of it arguing semantics. Oh well, you live, you learn. Well, some people live and learn. But I don’t think it’s going to be you, due to the massive blood loss and also because of that angry, bloodthirsty bear about to eat your face. Sorry, buddy.

Oh wait, I just remembered I have my phone on me. I’ll tweet for help.