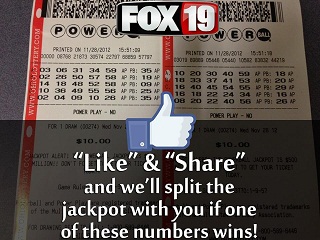 The big Powerball drawing has come and gone, and alas, I did not win. It’s a shame, because being unemployed and what not, I could have really used half a billion dollars, what with Christmas right around the corner and my insatiable and extremely expensive addiction to myrrh. It really is the best of all the biblical hallucinogens. I was pretty sure I had the winning combo, because the little Indian dude at the store said, “Good Luck” to me. Apparently good luck means something else in his native tongue. Goddamn English as a second language classes!

If you didn’t buy a ticket, you still had a pretty good chance to win. You could go on Facebook and find numerous pictures people posted of Powerball tickets. They promised you that if you “liked” their photo, they would share the jackpot with you if they won. Talk about generous people. I’m sure they would have followed through with their promise because people don’t lie on the internet, that’s like a rule or something.
I really hope, since nobody that cares enough about me to set me up for life won it, that one of those Facebook tickets hit. I love a good class action lawsuit. Mmmmm, tastes like John Grisham.

“Your Honor, I was one of those eight hundred thousand people who liked the defendants photo. I move that you immediately find in my favor and award me my three hundred and thirteen dollars, less lawyers fees, and I want it now! I’ve got scratch tickets to buy!”

If it went to court and the defendant didn’t have to split the money there would be riots. People angry that they got horn-swaggled out of the money that was rightfully theirs, due to their access to a functioning internet device as well as their high level of gullibility.

But just think of all the other ramifications of a verdict such as that. All the other social contracts that you have signed would essentially become null and void. All of a sudden those pictures of abused children that you “liked” to prove you don’t like child abuse are now just pictures of abused children that you liked. That looks bad on a resume. This verdict is already messing with your ability to find gainful employment.

All those people who you invited to join your farm are no longer legally obligated to tend to your crops, nor your livestock. Thereby putting the very food source that you rely on to feed your sweet beautiful baby children at risk. They are trying to kill your babies!! Now you can’t feed your family, all because of some selfish prick looking to stockpile Facebook “likes” and then, I guess, barter away all those “likes” for goods and services after the end of the world.

You know, in the future, when we start using Facebook likes as currency, and we stop liking pictures of abused children to prove we don’t like child abuse.