I was never going to cut my hair, that was my plan.

I wasn’t a hermit that lived in a cave. Or that Samson dude from the bible who got all his strength through his luxurious locks. He was probably using steroids. Maybe an anabolic steroid shampoo, or a testosterone based cream rinse conditioner, I don’t know. I’m not a hair doctor. I wish I was because I would have all of that sweet hair doctor money. Plus I could write prescriptions. That’s where the big money is. America loves pills.

I was a teenager in the 1980’s, that is the reason why my hair was so long and beautiful. Most of the credit for that goes to Pert Plus. Because it had shampoo and conditioner in the same bottle. So I didn’t have to tire myself out by  expending energy on acquiring multiple hair cleansing solutions from various exotic locales.

I started growing my hair after I discovered Ozzy Osbourne. I didn’t actually “discover” Ozzy, but I heard about him from some older boys in the neighborhood and bought his Blizzard of Ozz album from Columbia House Records & Tapes. I wish I had discovered him though, because I would probably be rich right now, with all of that sweet music mogul money. But I would also probably be dead by now too, so I guess it’s for the best. I played that Ozzy tape until it wore thin and snapped. Then I scotch taped it back together and played it some more. Because that’s how shit got done in 1984. Shit broke and you fixed it and you moved on. I decided that this was what I wanted to do with my life. I wanted to rock. Dee Snider and Twisted Sister might want to take the credit for that, but it was Ozzy Osbourne’s doing. At least as far as lil’ Billy McMorrow was concerned.

Now, my mother had been gone for a couple of years when I decided to grow my hair. My father was against the long hair from the get go. He was always a fan of the classic crew cut in the summertime and a boys regular in the wintertime. When I told him “No, I shan’t be getting my hair cut this month, Father. I’m going to grow it long in the style of Ozzy Osbourne”, he was more than a little reluctant. He told me that he would kick me out of the house and I could live on the streets like a common vagabond if I didn’t get my hair cut. But luckily for me, this was also the period in time where he was pretty much always drunk, so he usually didn’t remember that he was mad at me about my long hair. Good times!
This went on for a while. Dad would give me some folding money to “go get that fucking mop chopped” and I would go out and spend it on a pint of Jack Daniels or Southern Comfort and a pack of Marlboro box. Or maybe a stick of the reefer weeds all the kids were talking about.  Hey, it’s only teenage wasteland.

My buddy Pauly D. (no, not the fucktard from MTV) and I bonded over our mutual love of Ozzy Osbourne and Defender.  We would hang out down at the baseball fields at Pingree School in Weymouth, Mass., where we would smoke cigarettes and swear out loud. One night we were sitting on the swings and we decided that we should start a band. We figured if we were going to be the best band ever, then we needed a name that let people know how great we were before they even heard us. After much animated discussion that only two 13 year olds jacked up on whiskey and cigarettes can have, we decided that the name of the band would be Lethür Angel. This name combined all the essential ingredients for greatness. It had leather in it, which is a very durable material, built to stand the test of time. But it  was spelled wrong because all kids love stupidity. It also had a u with umlauts like Mötley Crüe, which was very cool indeed, both back then and in present times as well. In the logo, the g in angel was going to wrap around the name and have a pointed tail like a devil. See, it’s like a double entendre, kind of a good vs. evil thingy. Plus, angels are beloved creatures the world over, unless you’re a Satanist or terrorist or communist, or any of the other ist’s that you gotta keep your eye on these days. Like rapists.

Pauly D and I would always talk about moving to L.A. We figured that we would just wait and get some awesome apartment the day we got there with the money Pauly D had saved from his Patriot Ledger paper route. That should cover rent. We would hold all kinds of cool parties in our fuck palace where scantily clad sweet beautiful lady babies would hang out with us and constantly ask us to write our names in cursive on their boobs with silver Sharpies, which are universally recognized as the coolest of all the Sharpies. 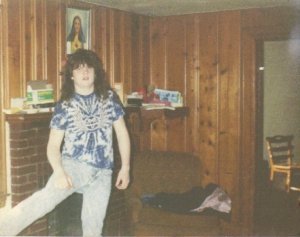 Mary, Mary, why you bugging?

Obviously our crib would have a full bar stocked with only the finest of ill-gotten booze. Only the fruitiest of wine coolers, and the schnappiest of schnapps need apply. Listen, we realized that we weren’t going to make it right away. We knew that we would have to pay our dues for a few weeks, maybe a month tops. Maybe we would have to sell marijuana on the streets and school playgrounds to innocent children just to make ends meet. Or cocaine. Or Avon.

Or maybe we would have to make sex to beautiful rich ladies in exchange for monies. Or maybe in exchange for goods and sundries. Or perhaps for a little of both. Say some deli meats and cheeses, a loaf of bread, some toilet paper and maybe a little walking around money for a session of sexmaking. That’s just an example, we never worked out an actual sexmaking price list. But we were willing to make sex to as many rich beautiful honey babies as we needed to in order to finance our dreams of rock and roll stardom. We were even willing to go so far as to make sex to beautiful poor ladies in hopes that they would tell the beautiful rich ladies how good we were at doing the deed of making sex, during one of their monthly beautiful lady pillow fights we assumed they had. We loved the music so much we were willing to make sex to beautiful ladies whose incomes fell below federal poverty guidelines. That’s dedication to the craft. It’s something that you don’t see in kids today, and America is suffering for it.

Once we had finally gotten a gig at the world-famous Whiskey a Go-Go, everybody would know how incredibly talented we were. We would likely be signed to a long-term deal where we would record albums and tour the world in tight leather pants and half-shirts. It’s pretty standard rock star stuff. But before any of that could happen, my hair needed to be longer. I cultivated my hair like a baby. Do people still cultivate babies? Or has that become “unacceptable” in our “politically correct” society, and now babies have to “cultivate” themselves? I think that was a stem cell joke. I’m not sure, but if cultivating babies is wrong, I don’t want to be right. Unless it’s a felony.
I stopped going to the barber that I had gone to since I was a wee lad, and started going to a hair salon across the street. It was called “Charlie’s Angels” and yes I am adorable, thank you.
I would go in there and say “Just a trim, please. I’d just like to remove my split ends.”

This went on for years. I would get a trim every six months or so, nothing more. (Except for one horrible experience where I had my sister cut my hair the night before I had to go to court. What? She had taken cosmetology classes for about two days. We got into an argument halfway through the haircut when I got mad at her for cutting too much off the back. Then she refused to cut the front. But that’s its own blog post entirely.)

Pauly D and I never started a band or moved to L.A, although he did learn to play bass guitar and has played in a bunch of local bands.. I saw him for the first time in years a couple of weeks ago. We had ourselves some laughs about the good old days, we always do.

I finally cut my hair when I was 19 and my father asked me to be his best man when he got married again. He only had one request.

“Get that fucking mop chopped!”

“Okay Dad, I’ll cut my hair to be your best man. But I’m still getting hammered at the wedding reception, even though I’m only 19 and you’re a recovering alcoholic. Okay?”