The Coolest Kid On The Block 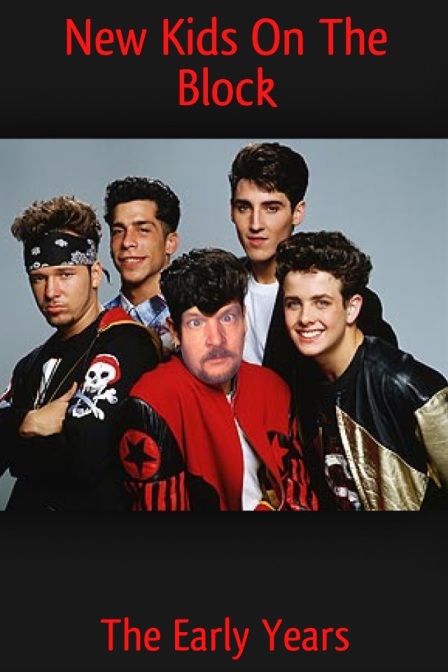 The day that I got kicked out of New Kids On The Block was one of the worst days of my life. I remember it like it was yesterday.

What’s that you say? You weren’t aware of the fact that I was one of the founding members of NKOTB? So you probably are also unaware of the painful humiliation that I went through during my unceremonious dismissal from the pop music juggernaut that I helped create? Well then, have I got a story to tell you.
We travel back to the year 1984. It was a simpler time, when strangers would smile and say hello to you on the streets before stealing all of your money for crack cocaine and possibly giving you AIDS. The setting is Boston, Massachusetts. Well, more like south of Boston, but whatever.

A young Bill McMorrow is blessed with the voice of an angel, and the sexy hip shakes of the devil. I would spend countless hours in front of the mirror with hairbrush in hand, tirelessly choreographing the sultriest of dance moves. I was sure that one day, I would be discovered and lumped in with some other boys who held the same dreams of synchronized glory. I understood it wouldn’t be easy, but with hard work, and long distance dedications, I knew it would happen.

One day I was at the South Shore Plaza in Braintree, Mass. I was in Filene’s Basement searching for that perfect pair of Girbauds. It wasn’t an easy task, as I have very muscular calves yet remarkably slender thighs. It’s kind of like my trademark. As I made my way to the boys fitting room, I was approached by a creepy older man who said he “liked the cut of my jib”. I awkwardly thanked the stranger and, needing to know exactly how awesome these pants would look on me, I hurried into the changing room. As I slipped into the Girbauds, I heard a gasp from behind me. Turning around, I spotted the creepy dude peeking at me from the other side of the curtain. I said, “What the hell are you doing, weirdo?”

“Oh, I’m sorry. I hope I didn’t frighten you. I’m just scoping out beautiful young boys for this new musical group I’m putting together. Would you be interested in joining?”
Startled, I replied, “Hell yeah, I am very interested in being a star. But why don’t you have any clothes on?”
He said, “I was waiting to try on some outfits, but the dressing rooms are all full. So I thought I’d save time by disrobing out here, while watching you. You don’t mind do you?”
I did mind, but I didn’t want to ruin the chance of musical infamy by complaining about some petty issue like a grown man with no pants on leering at my beautiful half-naked boy body.
So I said, “Oh no, I hate when the dressing rooms are full, too.”
He asked if he could come in and I could audition for him while he tried on some trousers, and the rest as they say, is history. The next thing you know, I’m living the life. I was flying around the world wearing only the finest of Swatch watches, Kangol hats and acid washed jeans. I was drinking unlimited amounts of only the coldest of Jolt Colas, free of charge. I had Emmanuel Lewis and Corey Feldman’s beeper numbers. I hung out at all the coolest, most exclusive parties. People were always coming up to me and saying things like, “Oh Bill, I want to have your baby”, or “Hey, you’re a superstar, have some free cocaine”, or “We are going to beat the living shit out of you because we can’t stand you and your crappy music.”

That’s right I was living the dream. Photo shoots, radio interviews, sold out concerts. It was all happening. But I sensed some friction in the group. Donnie Wahlberg approached me backstage one night after a show. He was mad because he thought I was too good of a dancer. He told me, quite animatedly, to “Cut the shit, and give us other boys a chance to shine”

I couldn’t believe the nerve of this dude. He wanted me to dance less impressively on purpose?

“I’m sorry Donnie, but I can’t just stop being a world-class dancing machine. It’s in my blood, like my predisposition to diabetes. You might as well ask me to stop singing like a delicate songbird, too. Or ask me to stop wearing these pants so well. It ain’t gonna happen. I am an entertainer, and if my outrageously awesome pop locking skills have you concerned, maybe you should step up your game. Maybe try watching Dance Fever or Solid Gold sometime, because you might just learn a thing or two about the art of the dance.”

By this time some of the other Kids had joined the fray. Joey McIntyre piped in with something along the lines of, “Well if you keep dancing so well, people are going to realize that we aren’t nearly as good as you. That’s not fair to us.” I was steaming by now. “Listen Lil’ Joe”, that’s what I used to call him,”I’m not gonna dumb down my sweet ass moves so you feel better about your lack of rhythm. I have worked far too hard at mastering the art of shucking and jiving to all of a sudden be relegated to doing a simple two-step soft shoe.”
Danny Wood was on my side for the most part. We always got along due to our mutual love of collecting friendship bracelets. When we were on tour, D-Wood and I would spend hours scouring local craft stores, yard sales and strip joints searching for just the perfect bracelet to define our friendship. Sadly, we never found it. He was a little bit scared that the rest of the group would be replaced by more experienced dancers who could keep up with me. But he knew that there was no way that they were going to get me to commit to being anything less than the best dancer in the world. He could see the resolve in my haunting blue eyes.
“Bill, whatever you decide, just remember that I think that you are one of the best pure entertainers ever, with dance moves that I can only describe as ‘the freshest’. Do you think that maybe you could mentor me, and enlighten me with your extensive knowledge of choreography?”
I was moved. “Danny, I would like nothing better than to help you achieve your dreams of being almost, but not quite, as good as me. I appreciate your support during this hectic exchange betwixt legitimate musicians, you are a true friend. I just wish we could find a bracelet to prove it.”

I left the arena and went out to our tour bus. I was so mad that I only brought like four or five beautiful ladies with me. After pleasuring all of them multiple times sexually, I fell into a troubled sleep. How could my boy band mates treat me like this, when I was obviously the star of the group. Why couldn’t they see that my sweet, seductive moves are what brought the luscious babies out to the shows? I decided that we would have a serious meeting the next day to straighten this shit out.
But when I woke up the next morning. I was no longer on the tour bus. I was laying by the side of the highway, naked and covered in silly string, my beloved Girbauds beside me, all torn and muddy. They didn’t even have the common courtesy to wake me up before they broke my heart, or my pants.
I will never forgive them for what they did to me. When I heard that they replaced me with that Knight kids brother, I was emotionally destroyed.
Because that kid couldn’t shimmy for shit!