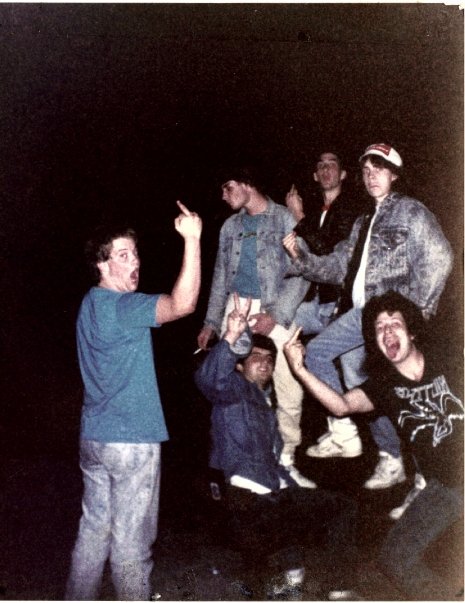 It was easier back then, you know? In the 1970’s I had guidelines. I wasn’t supposed to talk to strangers. I had to be in when the street lights came on. I wasn’t supposed to drink the whiskey Dad kept under the sink and then water it back up. You know, I had ground rules.
The 1980’s were a time of breaking those ground rules . Pulling all-nighters, smoking cigarettes with my beautiful boy face, cranking the tunes, to sometimes uncomfortable levels, on the boombox. “Disturbing the peace” is how the police described it. I called it “Loving America more than you”. They were probably more correct in their assessment of the situation, but what were we to do. There wasn’t a shitload of places for 15-20 teenagers to hang out at the same time without being accused of disturbing something. Or stealing something. Or having sex on something.
There were the park benches. At one point the town of Weymouth decided to install some wooden benches and small tables in a section of town called Jackson Square as part of a beautification project. There is a Herring Run located there. A herring run is a stream that thousands of slimy fish (herrings) swim up every year to lay their disgusting eggs in the filthy waters of Whitman’s Pond. Yes, it does sound magical. Maybe not David Copperfield magical, but definitely David Blaine magical. Every spring, children flock to the Herring Run to watch this circle of life in action. Or they used to, I’m sure nowadays they just watch the Lion King on their iPad. Do kids still watch the Lion King or is it all just hard-core interracial porn now? I don’t know. But back then, pre-internet, the Herring Run was a happening place. Everybody was there. That older boy with the moustache and Camaro, the girl with the face paint, that kid who smelled like herring, and other people too.
Once a year the town would hold a Herring Fish Fry, which sounds almost as disgusting as it tastes. Almost. But no matter how disgusting the idea of eating fish out of that dirty water was, people loved the fish fry.  So they decided to build benches and tables at the site of the annual festivities. But the Weymouth Police didn’t care for us hanging out on those benches the other 364 days of the year. They would always come down and say “Move along you bunch of fuck faces, before we beat you to death with our night sticks and dump your bodies in the quarries where no one will ever find them, you pieces of shit”. I’m paraphrasing.
There were two cops that always patrolled that section of town. We took to calling them Hocko and Jocko, because we were incredibly funny teenagers with not only love for a good rhyme but also a natural distrust of “the man”. Whenever we would hang out at the benches, Hocko and Jocko would inevitably appear and “give us the business” about being “minors in possession of alcohol” or “smoking marijuana in a public place” or just generally “being too fucking cool for school”. They would tell us to leave and we would ask, “Where should we go?”
They didn’t care where we went as long as we weren’t there. Until later on that night when they would show up at the pond where we had all gone because we weren’t allowed down the Square.

Running from the police through the woods was a rite of passage for generations of rebellious teenagers across the land. The party would be in full swing. Tunes would be cranking from the boombox, and the bonfire would be roaring away. Twenty or thirty drunken 14-18 year olds would be there, plus the creepy older guy who would go to the packy for all the booze. All he wanted in return was some free beer and a chance at the virginity of every girl there. As well as most of the guys too.That seemed like a fair trade for some peppermint schnapps and a pack of Marlboro 25’s. The night would progress and people would get loud talking about going down to the Paradise City where the grass was green and the girls were pretty.
Or have heated arguments over how you should come crawling faster and obey your master. Inevitably flashlights would be seen making their way through the woods and someone would yell, “Pigs!!!” Everyone would scramble, in all directions, some trying to grab their beers or bottles, others trying to wake their passed out friend and mobilize them to action.
I’ve always thought that running as fast as you can while being chased by men with guns, through pitch black woods after drinking half a bottle of Jack Daniels should be a required course in all schools. Not only is it a test of a childs physical fitness, but it’s also as a great way of seeing how fucking cool a kid can be. Plus that shit just looks good on a resume.

About 5-10 years ago the town built a skateboard park right next to where those benches are. I don’t know if the police still give the kids as much of a hassle about hanging out there as they did to us. But I’m assuming they still do. Because teenagers will always drink beer and smoke weed and crank tunes. And have you heard some of the music these kids are listening to nowadays?  Have you seen the skinny jeans they wear? It’s surprising they don’t get hit in the face with a nightstick all the time.  It’s just weird to see that they finally built a hangout spot for them when they wouldn’t do it for us. Bunch of dicks.

The town, now the city, of Weymouth, also turned the old police station into a teen center. A fucking teen center. A place for teenagers to congregate that isn’t the woods, or the train tracks, or the cemetery. A place where there’s actually adult supervision watching out for their well-being. I’m sure that adult supervision probably frowns upon the kids playing quarters and fingerbanging on the property.  Back then the old police station was just the current police station, and the only time teens congregated there was when the shit went down. Which happened quite a bit. I mean, it was the Eighties.

Everyone was getting fingerbanged back then